I must admit to having a bit of a bee in my bonnet recently. I have been very interested in how classical “crossover acts” are cropping up in so called “respectable” classical polls. As someone who runs a successful New Orleans Jazz Band that is unashamedly populist, I have a respect for such crossover artists and the positive effect they can have on different styles of music. Some of you may have heard of the phrase “There are more people who enjoy playing jazz than there are who enjoy listening to it” When I first read this comment it really did resonate with me. I have long felt the “jazz world ” to be a club run by and for its members own benefit! Many musicians shun conversation with enthusiasts, communicate badly with audiences on stage and blame audiences for not understanding jazz if they are less than enthusiastic. 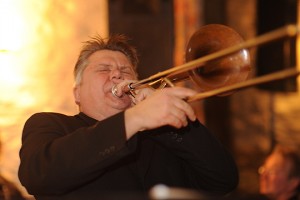 Jeff Williams, the author of these thoughts!!

Has it not occurred to jazz musicians that a combination of their music and the presentation of their music has created barriers that has made for a difficult platform for their “art”? Firstly let us consider the music. Some forms of art are easy to access. By access I mean they are easy to enjoy. A well written book such as Animal Farm by George Orwell is able to be read, appreciated and universally acknowledged as “quality” Van Gogh’s paintings can be appreciated without having a degree in fine art from the Courtauld. Finally, most people who come in contact with Louis Armstrong “get him” immediately! No of these three examples are populist. They are just very popular by the nature of their quality and accessibility. The problem is with jazz, as I see it, is this: Many of its practitioners don’t want to play jazz that is easy to listen to. They seem far more interested in creating challenging music for themselves that show off a range of musical skills that have little to do with communicating the human condition. Higher, faster, complicated, harmonically obscure, with awkward time signatures and with solos that go on for ever!! Is it little wonder that in some cases their are more people on stage than in the audience! As much as I am against “dumming down” I also don’t feel that art should require vast amounts of learning before being able to be enjoyed! 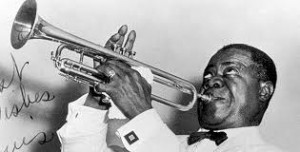 Louis Armstrong a great communicator of music and emotion

In the same way that there are “clever” writers and “clever” comedians, there are “clever” jazz musicians. Clever does not equal excellence. Whilst I acknowledge that there are people who enjoy their art “clever” I feel there is an element of self congratulation in understanding these various art forms. Surely art should just leap out at you and engage you? It should make you laugh, think, cry, get you angry. Clever art does non of these things. It separates and divides people. We hear phrases like “You don’t understand it” “Maybe it is too clever for you” “If you had gone to University you would understand what he/she means” “Actually, that is a very clever joke, but you need to know about………to understand what they are referring to”. 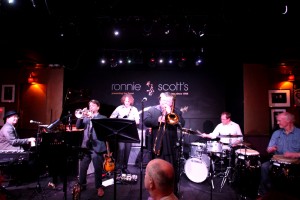 Just as important is what my band plays. The band in question, by the way, is the Mississippi Swamp Dogs. We play a great range of jazz based music from the Southern states and New Orleans. We play music from the 1920’s through to current times. In other words we offer a variety of styles and music which is inclusive and accessible. The music we play is “Jazzy” as opposed to “Pure” jazz, whatever that means. My intention is to entertain an audience. Make them feel good, make them want to dance, clap their hands and laugh. That’s why we have had repeat bookings, time and time again across London and beyond. Maynard Ferguson, Canadian Trumpet Player and Bandleader, used to have a saying “One for them and one for us” Meaning he would play something for an audience and then something for himself. Amongst purists he was not respected. He did, however have a fine band that worked all the time entertaining and delighting crowds. These crowds, not put off by esoteric convoluted and obscure improvising, would go on to explore jazz more and widen their horizons in their own time. Someone who walks in to a gig, with a disciple of John Coltrane, playing over one chord for fifteen minutes, will be put off jazz for life if it is their first experience of jazz! Find out more about the Mississippi Swamp Dogs here. And feel free to get in touch!! http://ukjazzband.co.uk 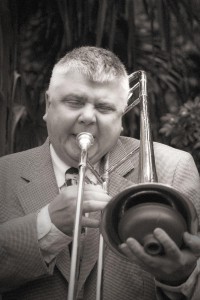