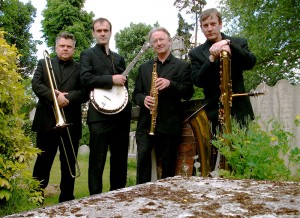 Have you been given the task of arranging the funeral for a friend or family member who has requested a jazz band? If this is the case I suspect you’re being asked to help celebrate the life of an individual who looked at the world from a different angle than most. Funeral Jazz Band Hire is a long standing tradition in New Orleans.

We understand if you, the person asked to organise jazz band hire for the deceased, finds the request unusual or even down right quirky. More than one client has expressed their concern whether a New Orleans Jazz Band is the right way to mark the passing of a loved one. Once the jazz band strikes up, you will find everyone attending are converted! This is as the band begins to walk everyone up to the chapel.

We think of it as a ceremony in two parts. The first part concentrates on mourning the deceased and is represented by the slow marching of the band, followed by the cortege. It is basically a Jazz Band Funeral Procession. As the parade up to the chapel takes place the band play old traditional hymns such as The Old Rugged Cross, Just a Closer Walk With Thee and Abide With Me. Post service the band then ring the changes with more happy and stirring songs to celebrate a life, hopefully, well lived. Jazz funeral songs like After You’ve Gone. When You’re Smiling and that old favourite The Saints!

We supply Funeral Jazz Band Hire in London, the South East and most parts of England. We do this at a sensible price, even away from London. This is because we have excellent relationships with talented local musicians around the country. In effect we combine London professionals with local players, keeping costs down. We usually recommend between four and six players. In the following video you can experience the band play an example of a slow hymn, sometimes known as “The Dirge”. This is followed by some uplifting happy music. Here is a lovely article from Time Life newspaper  discussing this very tradition.

What can we do to facilitate the process? Our Funeral Jazz band Hire service has been at the forefront of attending funerals. With our superb New Orleans Band this has been the case for some years now. We always ask our clients why they have chosen such a send off. Most people get the idea from the 1970’s James Bond Film “Live and Let Die”. The opening scene is a jazz funeral featured a band  playing “Just a Closer Walk With Thee” on the streets of New Orleans.

Contact us for a quote or phone us on 020 8761 8932 or 07747 801471. We can discuss your requirements of the funeral you are arranging. Here’s a genuine testimonial from a client who arranged his brothers funeral recently.

”The New Orleans Funeral Jazz Band gave my brother the best send off ever imagined at his funeral celebration yesterday. Jeff’s Band arrived well before time. He met immediate family, played before, during and after the service.

We went for an upbeat celebration which the Band achieved to perfection. The whole gathering were saying it was the best funeral ever. If you have ever fancied a real ‘send off’ that won’t upset the older generation go for Jeff and the Mississippi Swamp Dogs.