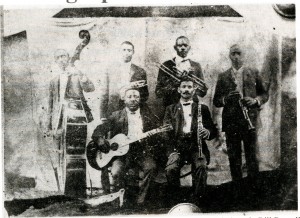 New Orleans Jazz Band whats in a name? The general publics love affair with New Orleans and early jazz shows no sign of abating. With the recent film, the Great Gatsby, I have seen an increase in the popularity of jazz bands playing this genre of music. What I find interesting is how many different names it is known as and described as. Firstly an explanation of the different types of early jazz:

However, we now have to contend with a new generation of listeners, watchers and dancers who know nothing of the history of the New Orleans jazz music, nor do they care. And quite honestly, why should they care? After all the music is the music and if it’s good, it’s good! I have heard the music called 1920’s Jazz, Prohibition Jazz, Speakeasy Jazz and Great Gatsby Jazz. New Orleans Jazz is probably what they are listening to but not what they are calling it.

Another aspect of the current interest in New Orleans jazz is how much people like to dress the part. Dancing too is very important. I wonder whether this has something to do with being British? We do love a fancy dress opportunity! Certainly things have changed from five or ten years ago when musicians were expected to turn up for function gigs dressed in stripy blazers. No longer do we need to suffer the indignity of looking like musical deck chairs. Now we don flat caps, braces, striped shirts and woolly trousers. How important is it to recreate New Orleans jazz accurately? I suspect not important at all. Gone are the eagle eyed discerning experts of yesteryear who treated the music like an intellectual exercise. Instead we have something much closer to the spirit of New Orleans Jazz, which is a group of people just out to have fun and enjoy themselves!