From my own perspective as a middle aged musician specialising in light music (jazz band, swing band hire, soul, party band hire and the like) I have reached a point in my life and musical career where I have seen certain changes take place. More importantly I have come to realise these changes are here to stay and I have had to adapt to these changes. Dealing with change is difficult on different levels. Firstly you hope the change is temporary, then you realise it is here to stay, then you have to find a way to work with a new regime. You have to fight your own aversion to change and learn to accept that things will not be going back to how you liked them, and you will not be going back to things that were familiar. Music, like most things are subject to change. 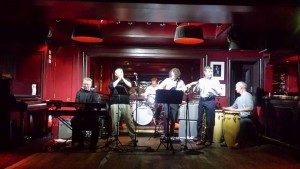 Take public taste. From about 2004 onwards there was a surge in people wanting a swing band for their wedding party or their corporate event music. At some point around this time, well known musical artists started to bring out jazz and swing cd’s. This was good news to people playing this kind of music for a living. It meant there were paying customers willing to buy their services, in order to listen to the type of music those musicians specialised in. At the time we were dealing with a great economy that wasn’t going to change until the end of 2008. Any musician who worked as a freelancer on gigs, doing “functions” was playing swing numbers and the music of Frank Sinatra. 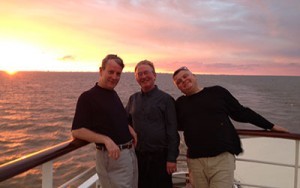 Dealing with change in music. Relaxing on the back deck before a four hour deck dance on the Amazon!

An excellent example of dealing with change in music is the cruise band hire industry. The demographic of the Cruise business tends to be 55 and over, up to 75, even 80. For a long time the staple repertoire on a cruise ship band gig was the music of Sinatra, Dean Martin, Vic Damone and Glenn Miller. It was important to be able to play waltz’s, foxtrots, jive, tango and latin rhythms like the cha cha cha. Today, anyone between the age of 55 to 75 has been brought up with the Beatles, the Rolling Stones, James Brown and Stevie Wonder. Ironically, the younger consumers of music have been watching Strictly Ballroom and are fascinated by the idea of dancing to a live band playing the tango!! The last time my band played on a cruise ship we were playing more and more hits from the 60’s and 1970’s. Very rarely did people ask for anything older other than when the band was playing jazz band music.

One change musicians have to confront is the age question. For ten years my London party band played for one or two weddings every week. In fact my wedding jazz band once did two weddings on the same night in the same hotel in two separate rooms!! (We weren’t running from room to room playing tunes in alternative rooms, we had two versions of the same band out that night, and many other nights too) Of course, most brides are young, and with the internet such an important part of choosing how to hire jazz and party bands, many choose bands of their own age. This means the older musicians have to be able to look at other opportunities for “age appropriate bands” My own solution was to change from playing party band music for a New Orleans themed band. No one expects a New Orleans band to be a bunch of young kids. Very successful it has been too.

So, when dealing with change in music remember, sometimes it is inevitable that change is going to take place. You may not want to change, you may want to keep playing the type of music you always have done. You may want to keep playing the music, with the people you have always played with. Sometimes change is forced upon you. When change is happening in music be aware. If you don’t adapt to the change, dealing with it as you go, you could find yourself sitting by a phone that no longer rings. Here are just a few more situations of dealing with change in music:

Here is a terrific article on adapting to changes in business. I think it is relevant to the subject here: Dealing with change in music.